The Florence airport (FLR) is called Amerigo Vespucci and is situated on the north-west outskirts of Florence, just 4 km from the city center. The airport can be reached from the center of Florence, driving the whole length of Viale Guidoni up to the road leading to the "Firenze Nord/Firenze Mare" superhighway (A1 and A11).
The center can be reached in bout 15 minutes by taxi, 20 minutes by Tramvia T2 (a tram thatconnects the Airport to the Central railway station of Santa Maria Novella) and in about 20 minutes with the Busitalia SITA Nord "Vola in Bus", bus shuttle operating between the airport and the central railway station of Santa Maria Novella. See below for more details.
The Florence Airport is connected to some of Europe's major airports such as Amsterdam, Barcelona, Brussels, Bucharest, Frankfurt, Geneva, London Gatwick, Madrid, Munich, Paris Charles de Gaulle and Vienna. There are also flights to and from the following Italian cities: Bologna, Cagliari, Catania, Milan Malpensa, Olbia, Palermo, Rome Fiumicino, Turin and Verona.
The airport is also easily reached from other Tuscan cities as it is just off the A11 and A1 Firenze Nord exit : Prato (8 km), Pistoia (24 km), Montecatini (36 km), Lucca (65 km), Siena (68 km), Arezzo (77 km), Pisa (86 km), Carrara and Massa (117 km), Grosseto (143 km), as well as from the sea and its ports: Livorno (115 km) and Piombino (170 km).
For more information, visit the airport's website at: www.aeroporto.firenze.it

Car rental
To rent a car for day trips into Tuscany, search for special offers on the booking box in the car rentals section, but read our tips first!

By train
The city's main railway station is Firenze Santa Maria Novella (abbreviated as Firenze SMN). Situated in the city center, it is conveniently close to the major tourist attractions as well as to the main exhibition and trade centers. The station area is also the principal node for buses serving the city and the surrounding area (see Moving around by bus).
The second most important station is Firenze Campo di Marte which is being used increasingly for national and international train services. The Campo di Marte train station is just outside the main road ring (boulevard) that surrounds the historical city center (the viali circonvalazione).
The Florence SMN train station is open from 4.15 a.m. to 1.30 a.m.
For timetables and tickets, visit www.trenitalia.it/ as well as www.italotreno.it

By bus
Florence is served by a number of international bus companies. The one with the most extensive network is Eurolines.
Getting around any city on bus/tram is easy. All of the main lines of the ATAF, the city's bus transportation system, stop at Firenze SMN; only bus lines 12 and 13 bus go to the Campo di Marte train station..
The TRAM line from Santa Maria Novella takes you to Scandicci, passing through the Cascine Park and over the Arno. The tram is a great alternative to buses traveling to the same area as it isn't blocked by traffic at peak traffic hours.

HOW TO REACH UNIVERSITY OF STUDY OF FLORENCE ARCHITECTURAL DEPARTMENT

Getting around by taxi
Getting around any city on taxi is not difficult, but you do have to know ahead of time that in Italy taxis cannot be flagged down as they pass you along the street! Taxis are instead "stationed" at special taxi parking stands in most of the major squares in any city and at the airport and they can be requested by phone.
In Florence, the numbers for calling a taxi are: 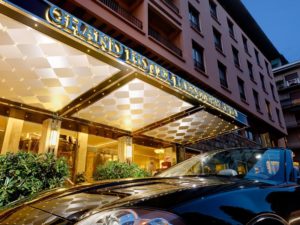 All participants are requested to wear their badges throughout the event.
In case of lost or find a badge, please inform the registration desk immediately.

We use cookies on our website to give you the most relevant experience by remembering your preferences and repeat visits. By clicking “Accept”, you consent to the use of ALL the cookies.
In case of sale of your personal information, you may opt out by using the link Do not sell my personal information.
Cookie settingsAcceptRejectRead More
Manage cookie consent

This website uses cookies to improve your experience while you navigate through the website. Out of these cookies, the cookies that are categorized as necessary are stored on your browser as they are essential for the working of basic functionalities of the website. We also use third-party cookies that help us analyze and understand how you use this website. These cookies will be stored in your browser only with your consent. You also have the option to opt-out of these cookies. But opting out of some of these cookies may have an effect on your browsing experience.
Necessary Always Enabled
Necessary cookies are absolutely essential for the website to function properly. These cookies ensure basic functionalities and security features of the website, anonymously.
Functional
Functional cookies help to perform certain functionalities like sharing the content of the website on social media platforms, collect feedbacks, and other third-party features.
Performance
Performance cookies are used to understand and analyze the key performance indexes of the website which helps in delivering a better user experience for the visitors.
Analytics
Analytical cookies are used to understand how visitors interact with the website. These cookies help provide information on metrics the number of visitors, bounce rate, traffic source, etc.
Advertisement
Advertisement cookies are used to provide visitors with relevant ads and marketing campaigns. These cookies track visitors across websites and collect information to provide customized ads.
Others
Other uncategorized cookies are those that are being analyzed and have not been classified into a category as yet.
Save & Accept